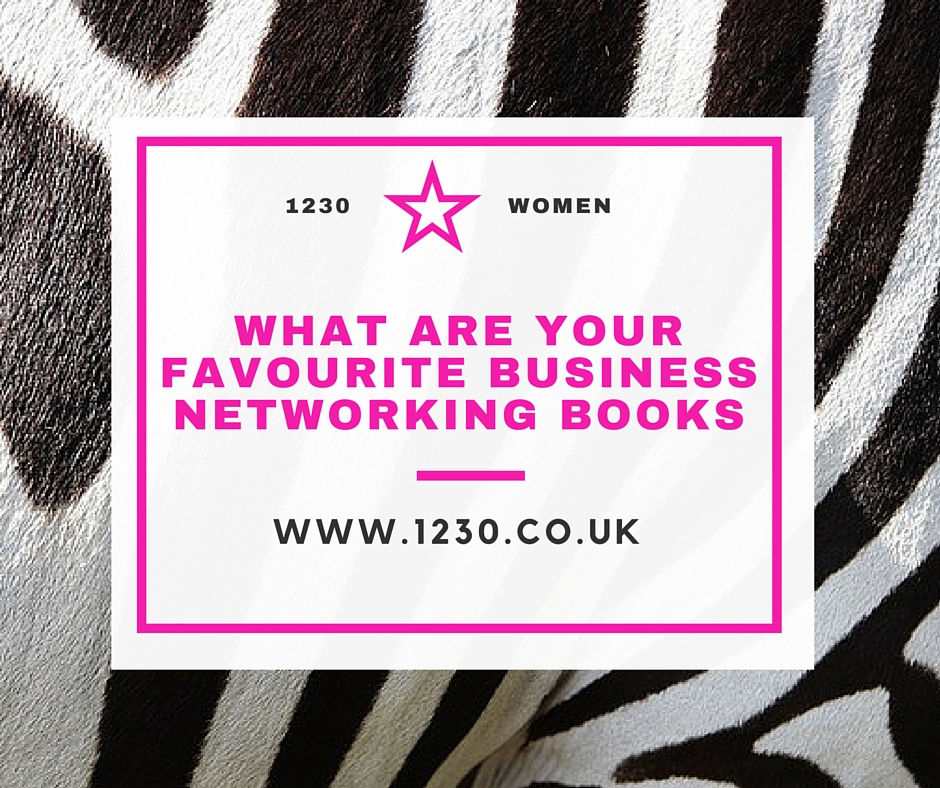 What are your favourite business networking books?

1. The Skinny on Networking: Maximizing the Power of Numbers by Jim Randel

From Amazon: You’ve probably heard the expression “It’s not what you know, its who you know.” Well, there’s a lot of truth to it. Of course you always need to work hard at your endeavor of choice (“what you know”). Your value in the business world depends on what you can do for people. Therefore, you must have a skill, information or expertise that others will consume that people will pay for. BUT, having that skill, information or expertise is often not enough to maximize your potential. You need people a network to help you distribute your skills. You need people to help you find a job, a loan, customers, or the right partner. The Skinny on Networking: Maximizing the Power of Numbers is about creating and maintaining your network. Illustrated, narrative and easily read in about one hour, this book condenses the thinking of experts, authors and celebrities alike and presents them in an entertaining and engaging format. In The Skinny on Networking you will learn how to: maximize your reach on the internet; get to the people you need; create networking gravity; employ the principle of weak ties; think like a boomerang; expand your social capital; build a reciprocity field; utilize connectors; move beyond your comfort zone; cold call; leverage initial meeting.

2. Highly Effective Networking: Meet the Right People and Get a Good Job by Orville Pierson

From Amazon: Virtually all job hunting experts agree that networking is the best way to find a great job. But most people don’t have connections to the decision makers who do the hiring. And “networking” books, which are mostly written by and for salespeople, suggest aggressive tactics, often confusing these with real networking. They focus on building a powerful network over the course of a lifetime. But when you need a new job, you don’t have time to build a huge, powerful network. You’ve got to use the network you already have. Orville Pierson, a top expert in job hunting, tells you how to succeed by effectively using your current circle of contacts. He cuts through the myths and misunderstandings to show you how millions of job hunters have networked their way to great new jobs. Highly Effective Networking empowers you to: * Use a small network to reach dozens of insiders and decision makers. * Get the right message to the right people, even if you have never met them. * Create a project plan to organize your networking efforts. * Speak effectively and comfortably with your networking contacts. * Talk to decision makers before the job opening is announced. Networking in job hunting is different than other networking. You don’t have to hobnob with the rich and famous. There’s no need for aggressive sales tactics. You just need to understand how real networking fits into your job search, and then be systematic about doing it.

3. Masters of Networking: Building Relationships for your Pocketbook and Soul by Ivan R. Misner

From Amazon: Packed with valuable insights from 100 of today’s top networkers, and with proven examples from many businesses and professions, this exciting book shows why networking is the most effective marketing tool today.

From Amazon: Make Your Contacts Count is a practical, step-by-step guide for creating, cultivating, and capitalizing on networking relationships and opportunities. Packed with valuable tools, the book offers a field-tested “Hello to Goodbye” system that takes readers from entering a room, to making conversations flow, to following up. Updated from its first edition, the book now includes expanded advice on building social capital at work and in job hunting, as well as new case studies, examples, checklists, and questionnaires. Readers will discover how to:

Job-seekers, career-changers, entrepreneurs, and others will find all the networking help they need to supercharge their careers and boost their bottom lines

From Amazon: In many ways, success at networking is the uncommon application of common knowledge. Most people understand that networking is important to their success?they just lack a step-by-step process to get the results they want. Almost no one really implements a comprehensive methodology that will build a business through networking. Thus, the need to network is “common knowledge,” and the development of the methodology required to be successful at it is the “uncommon application.”

By reading this book, you will experience the true essence and meaning of networking. The 29% Solution gives you the answers to two conflicting questions that a business owner or salesperson faces every day: How can I tend to my existing clients while at the same time network for new business? and, Should I place higher value on my current clients or on new clients?

From Amazon: With over 100,000 copies sold, this is one of the most popular business- and sales-boosting guides ever written. This new edition offers successful entrepreneur and speaker Bob Burg’s proven relationship-building system that thousands of professionals and entrepreneurs have used to turn casual contacts into solid sales opportunities. In Endless Referrals, he shows you how to:

7. Dig Your Well Before You’re Thirsty: The Only Networking Book You’ll Ever Need by Harvey Mackay

From Amazon: Bestselling author Harvey Mackay reveals his techniques for the most essential tool in business–networking, the indispensable art of building contacts.

Now in paperback, Dig Your Well Before You’re Thirsty is Harvey Mackay’s last word on how to get what you want from the world through networking.  For everyone from the sales rep facing a career-making deal to the entrepreneur in search of capital, Dig Your Well explains how meeting these needs should be no more than a few calls away.  This shrewdly practical book distills Mackay’s wisdom gleaned from years of “swimming with sharks,” including:

8. The Greatest Networker in the World by John Milton Fogg

From Amazon: Network marketing is a burgeoning field, and it can be a frustrating and difficult experience. There are many who have achieved minimal success, and many more who have made no money at all. With these discouraging figures, how can one become a member of the successful elite? Millions agree that the best way to do this is to spend some time with The Greatest Networker in the World.
John Milton Fogg’s extended parable is the story of a young man on the verge of quitting the multilevel marketing business. As he prepares to give his final opportunity meeting, he meets the individual everyone refers to as The Greatest Networker in the World. This warm and wise man takes in his young counterpart and shows him the trade secrets so he too can become a successful network marketer.
The young man soon learns that the trade secrets have very little to do with conventional marketing techniques. In fact, he has to unlearn everything he thought he knew about business. “The paradigm of network marketing is so fundamentally different and distinct from all other paradigms of business, that it requires a pretty complete shift from the way we normally view business to appreciate and understand it.”
The new paradigm is built around one’s habits of thought and discovering that the secrets to network marketing success are within oneself. The values of responsibility, team building, and caring for one’s downline play a much more important role than competitive promotion and advertising.
A critical skill for all marketers is the ability to teach people to teach others. Once one has mastered the new paradigm of multilevel marketing, he needs to not only show his downline how to master it, but also how to teach those techniques to others. This leads to greater leadership within the organization, more stability, improved productivity, and as a result, long-lasting success.

9. Smart Networking: Attract a Following in Person and Online by Liz Lynch

From Amazon: The key to unlimited opportunities for your business starts with Smart Networking. This is the essential guidebook for building business relationships in a wired world. Business strategist Liz Lynch demystifies the process and puts strategic systems in place that build connections worldwide and attract opportunities 24/7.

Packed with powerful strategies tested by years of experience, as well as real-life stories from the field,Smart Networking describes how to integrate face-to-face techniques with a strong online presence. You’ll get low-cost marketing tools that are designed to expand your professional circle exponentially. Lynch will also help you to:

10. Networking for People Who Hate Networking: A Field Guide for Introverts, the Overwhelmed, and the Underconnected by Devora Zack

From Amazon: Devora Zack, an avowed introvert and a successful consultant who speaks to thousands of people every year, found that most networking advice books assume that to succeed you have to become an extrovert. Or at least learn how to fake it. Not at all. There is another way.

This book shatters stereotypes about people who dislike networking. They’re not shy or misanthropic. Rather, they tend to be reflective—they think before they talk. They focus intensely on a few things rather than broadly on a lot of things. And they need time alone to recharge. Because they’ve been told networking is all about small talk, big numbers and constant contact, they assume it’s not for them.

But it is! Zack politely examines and then smashes to tiny fragments the “dusty old rules” of standard networking advice. She shows how the very traits that ordinarily make people networking-averse can be harnessed to forge an approach that is just as effective as more traditional approaches, if not better. And she applies it to all kinds of situations, not just formal networking events. After all, as she says, life is just one big networking opportunity—a notion readers can now embrace.

11.. . . and Death Came Third!: The Definitive Guide to Networking and Speaking in Public

In 1984 a New York Times Survey on Social Anxiety placed death third in the list of people’s biggest fears. The top two responses were walking into a room full of strangers and speaking in public.

Facing these two fears head on, ‘…and death came third!’ rocketed straight to Number Two on the Amazon UK bestseller lists on publication of its First Edition in 2006. Since then thousands of people have turned to its pages to help them network and present with much more confidence.

Written by the renowned networker and connector Andy Lopata.